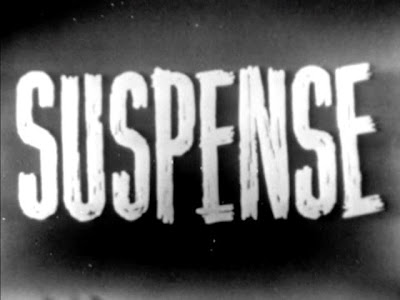 Ha! I have poor writing skills! Actually it will be revealed right now! The answer is that we will actually be headed to the vast desert-y regions of eastern Utah. A land where the sagebrush is king, and beetles roam free and un-harassed by the human foot! A land parched by sun, frozen by winter, and a little of both of those things in spring and fall! And land rich with potential, but even richer with un-potential. You know that story about the magical monkey paw that could grant wishes, but all the wishes had some sort of cruel side-effect that were all evil and stuff? That monkey paw is Eastern Utah.
Anyway, our story today begins in a little patch of nothing approximately 17 miles east of the Utah-Colorado boarder. The place is very desolate today, and I can only imagine it was even more so around the turn of the century. So one has to wonder why anyone would want to live out there. The answer, my friends, is this little guy. 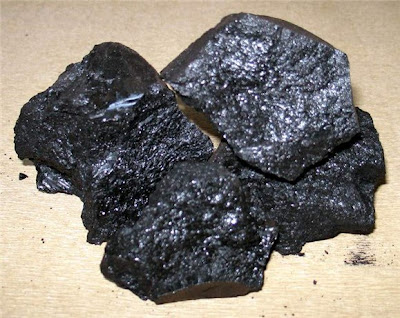 That unassuming little blob is a rock named Gilsonite. Technically it isn’t even a rock, nor is it a mineral. It is one of those unfortunate few earthy creatures that lives in the endless abyss that exists between rock and mineral. Like how the Nissan Cube exists between crap and extra crap. But unlike the Nissan Cube, Gilsonite is useful to us. Simply put, it is a solid chunk of oil (kinda). And humanity loves oil, even if it is solid. The real kicker is that Gilsonite only forms in commercial quantities in one place in the world, a little patch of nothing located approximately 17 miles east of the Utah-Colorado boarder. And so began the life of the town of Watson. 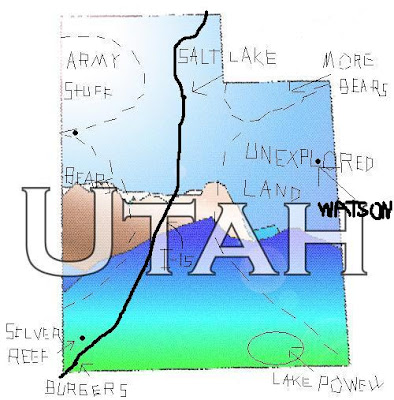 In 1880, while the rest of the state was rushing to the gold and silver mines of central Utah, a brave individual named Samuel H. Gilson decided to throw his hat in the Gilsonite ring. Now, you may have noticed that Mr. Gilson’s last name is Gilson, and the not-mineral they were interested in mining is named Gilsonite. Is this a coincidence? Nope. Mr. Gilson was honored with having natures asphalt named after him. I guess I can't make fun of him for it because it's more than has ever been named after me. Before Mr. Gilson showed up the stuff was called Uintahite, which I think has a better ring to it than Gilsonite but sometimes geology is like that. Here's a picture of Mr. Gilson. I don't know why they gave it that fancy frame. 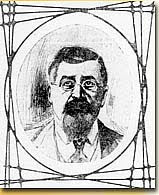 Anyway, cars were few and far between in 1880, and horses have very little need for hydrocarbons of any sort, so the question arises of why someone would want to move all the way out there to mine Gilsonite. Well, it turns out that Gilsonite can also be used for a number of other things that you and I never even thought of. It can be used for ink, paints, paper (somehow), and caulking for beer barrels. I’m guessing that prior to the discovery of Gilsonite transporting beer was a much larger ordeal than it is nowadays, and as a result it was far more difficult for groups of attractive singles to have parties on the beach or water fights at a BBQ.
The town of Watson was created in 1911 as a result of the mining activities. It was never very big, as most of the people involved in the mining lived at the nearby towns of Rainbow and Dragon (which is a cool name for a town). It served as a railroad terminus for all the ore trails headed out to the mines or over to Colorado, where the conversion to beer caulking would take place. The name Watson actually comes from the name of the dude who laid out this nifty (and notoriously dangerous) rail line, one Mr. Wallace G. Watson. For a while, things were really looking up for this forgotten corner of Utah. The place had a post office, a hotel, a couple of general stores, and several dugout houses. Here’s the only picture I can find of the place at its peak. 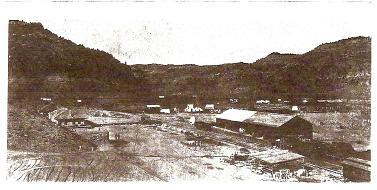 Look! Here's a picture of a really old guy that came up when I googled "Watson"! Maybe he used to live there. I don't know.

But the dark hand of ghost town-ness is ever present, waiting to consume the unwary village, town or hamlet into the swirling abyss of obscurity (which is different than the swirling abyss between rock and mineral).
In 1938, the mining operations were moved to a better (and still not quite abandoned) town named Bonanza, located a good 15 miles north of Rainbow and Watson. While this was great for the Gilsonite lovers, it was bad news for the towns that were no longer needed. Within a year the population of Watson dropped to 10 brave souls. This fact would be more impressive had I been able to figure out how many people lived there at its peak, but I couldn’t. So we just have to assume that it was more than 10 people. The town of Rainbow was abandoned, and Dragon hung on with 72 people. As some point between 1939 and 2010, the remaining 10 people took off or died. The place now looks like this. 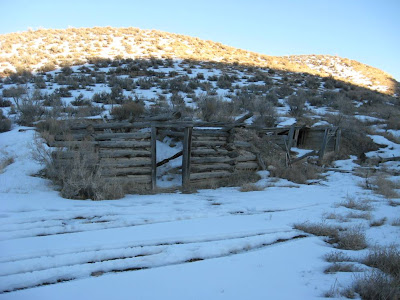 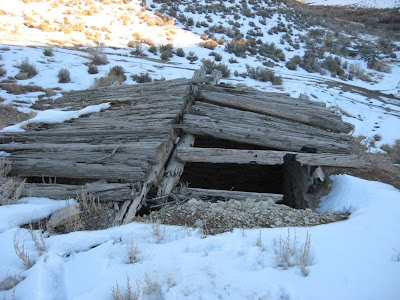 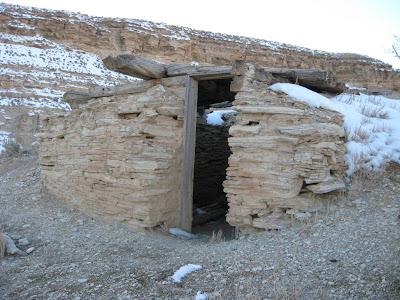 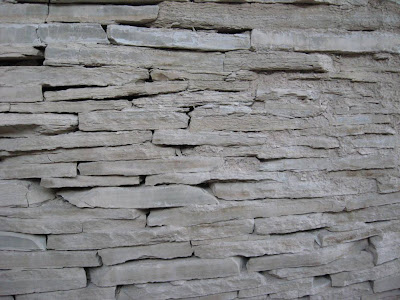 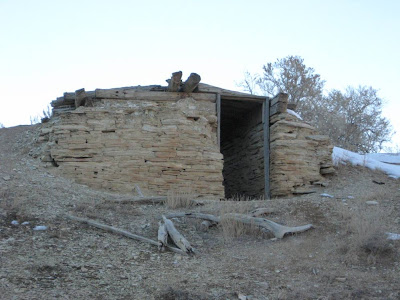 Most of these used to be houses I think. I’m not sure. In theory you can still find the basement to the hotel, but I sure didn’t. But then again I wasn’t really trying all that hard.
The town of Rainbow is even more ghosty. All that really remains are the Gilsonite mines. The veins were completely vertical, and were around 5 feet wide where I saw them. They are also wicked deep (up to 2000 feet!), and I couldn’t see the bottom anywhere along the mined out area. 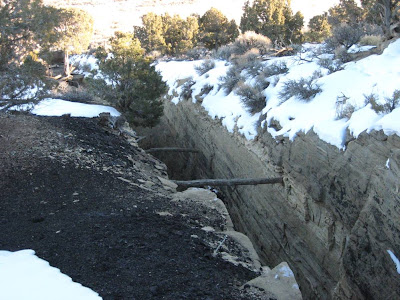 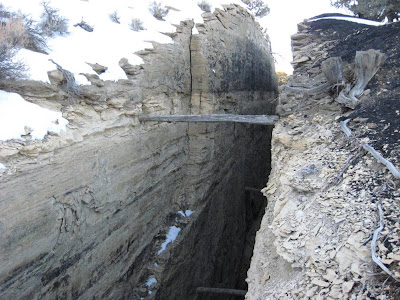 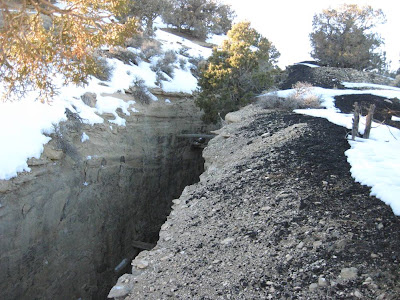 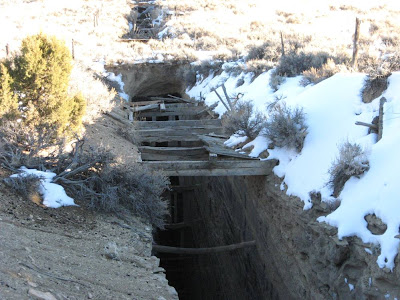 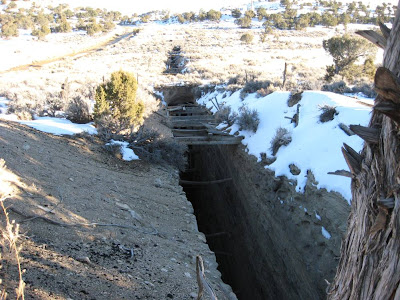 You could see this mined out crack in the earth stretching for miles over the hills. I don’t know how they got down there to mine this stuff out, but next time you ink up your quill or crack open a barrel of your finest hops and barley you had better be glad that they did. You can even see the mine from space. Here is a google earth photo of it. 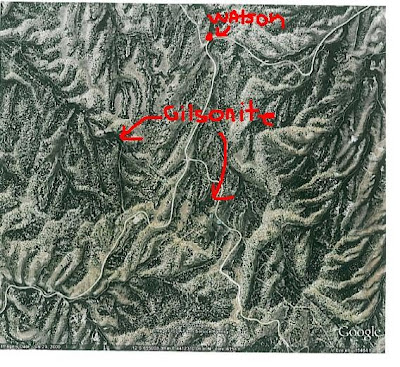 The town of Dragon would have been a great place to visit, but it is a good 12 miles further down a creepy dirt road and I couldn’t be bothered. Apparently a good-sized fire started in the Gilsonite vein there in 1908 and burned for over 2 years. Then in 1910 the warehouse burned down and took out a bunch of Gilsonite that people had already dug out. It appears that the town of Dragon had a fire problem, which seems fitting.

And so we leave the towns of Watson, Rainbow and Dragon (although we never really went to Dragon). You can go all the way out there if you REALLY want to see some log huts and a big hole in the ground, but it seems like you could probably just see all the huts and holes you want on the internet without leaving the comfort of your own home. For those of you who are interested, (which is all of you), Gilsonite is still mined at Bonanza, although I suspect that the main use of the stuff has changed. Or maybe it is still used to caulk up beer barrels. Just doesn’t seem like there is enough of a market for that sort of thing. It appears that people like to grind it up and spray it onto driveways as a pavement substitute. 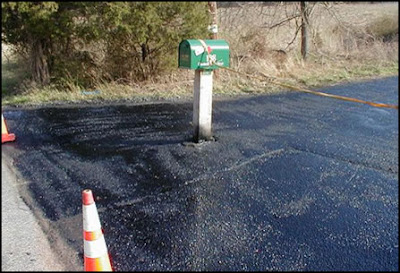 Apparently we also can spray it on mailboxes. Neat!

I've been thinking that I should put my good learned knowledge to use and build a new railroad just like Mr. Watson. Do you want to go in on it with me? Where does a new railroad need to be built?

If we are successful, we could make a ton of money. I mean, look at all the board games out there. The person with the most railroads always wins!!! We can't go wrong.

Sure we would be competing with large trucks on the government's oiled roads, but if we can more efficiently move people and product, we will win.

Another way to make money seems to be to take advantage of others' misfortunes, like living in Eagle Mountain. So maybe we could combine the two and build an Eagle Mountain line.

I really want to do a tunnel from Park City to Salt Lake. How much will that cost?

I think if we were on the board at UTA we could get some sweet cash.

How were the dirt roads through that area? I'm thinking of riding through there on a bicycle tour and I would love to visit some ghost towns.

Cheetah
I am a 36 year old geologist. Well, kinda geologist. I used to spend my day putting dirt in little baggies and tube for study. Now I'm unemployed and looking for love. In High School I ran for class office and lost.